Before we go further with the properties of Express JS let us understand what exactly does it mean to require in a Common JS module.

Common JS modules standardize the way of working with Javascript outside the browser. Common JS is a specification more like a design pattern. There are a number of libraries/modules which are implemented using this specification e.g.: express and you can build your own modules too. Like I told in my previous blog it mainly addresses the single global namespace issue with javascript. Actually a Common JS module is nothing but a javascript file. Each module is written in a single javascript file and has an isolated scope that holds its own variables. In this scope there are 2 key components:

Ok now let us take a closer look at express. So in my previous blog I told that if you go and take a look at the example code in the about page of Node JS it shows how to create a simple HTTP web server. Clearly Node JS can directly use the http module to create a web server. Then why do we need express you ask? Lets take a look:

Express extends the core capabilities of http and along with that it brings 2 key functionalities:
If you use the http module a lot of work like parsing the payload, selecting the right route pattern based on regular expression will have to be re-implemented.

Routing: Routing refers to the definition of endpoints (URIs) to an application and how it responds to client requests. A route is a combination of a URI, a HTTP request method (GET, POST etc) and one or more handlers for the endpoint.

So when a client sends a request to the path the callback executes where we connect to our next tier in our stack i.e. MongoDB.

So to conclude the key piece that express gives us is the capability to build the web server. But more importantly it gives us the restful end-points that is going to be called from our presentation tier (Angular JS) and once we get into the server methods it is going to reach out to the persistence tier (MongoDB). So in a way it acts like a bridge that gaps the tiers in our application. 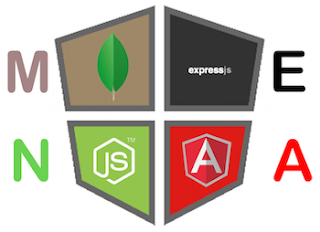 So a couple of weeks I was given this assignment to build a single page web application using the MEAN (MongoDB, Express JS, Angular JS, Node JS) stack as part of an interview. It was a simple todo application with features functionalities to add a todo item, mark a todo item as completed and delete a todo item. Given the fact that I have very little experience with building modern web applications using javascript it was quite a challenging experience. And I guess the whole point of the assignment was to judge how open I am in terms of accepting to work with new technologies and my ability to quickly ramp up on things. Nevertheless I enjoyed working on the application.
I had a little exposure to Node JS and MongoDB during one of my academic projects, but the other two Express JS and Angular JS were very new to me.
So the first order of business was to understand the importance of each of these technologies and how they fit in together for a web application to come to life.
So lets dive into it right away.

When you go visit the about page of Node.js the first example they give you is to create a simple HTTP server. I feel this kind of sets an impression on a beginner that Node.js is used for creating a web server. But that is not entirely true. Creating a server is just one of the many capabilities Node.js offers. Node.js is a platform. It is a platform which allows you to use its libraries to build a web server and that is just one application.


Next up Node.js uses what are called as CommonJS modules. Now what are CommonJS modules you ask? It is mainly used to solve the problem of Javascript's single global namespace. Here is an article which talks more about that. So Express JS is actually a module which we will require in for our MEAN stack application. So how do you require in a CommonJS module? We will look at this in the next part where I also speak about our next item in the stack, Express JS.

Posted by Unknown at 4:39 PM No comments: